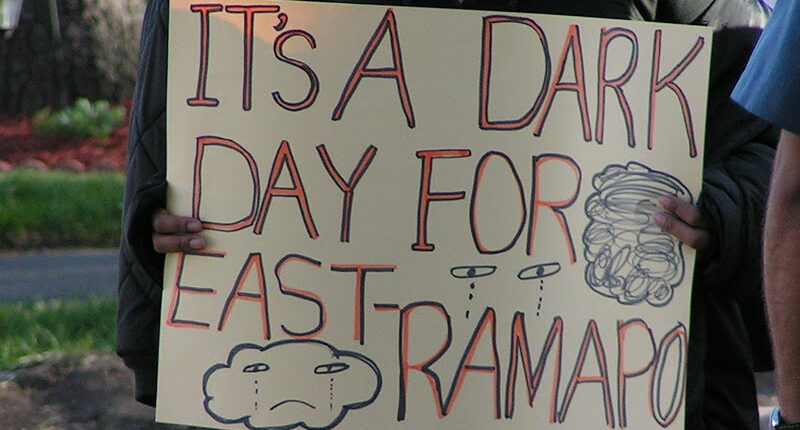 Power of Ten Update
Special Edition: The Story of The Sale of Hillcrest Elementary

The Story of The Sale of Hillcrest Elementary was reported in bits and pieces as it unfolded. It’s a story that deserves to be told as a whole, in one concise article.

This story begins in 2008 when the superintendent of the East Ramapo school district announced he would be looking into the possibility of closing a school and using the savings to fund more full day kindergarten classes. They superintendent formed a study committee which met secretly.

Rumors began to circulate among staff and parents about which school would be closed. There were rallies held to save Hempstead elementary school and many parents came to board meetings to speak against the closure of their child’s school.

In 2009 the superintendent recommended, and the board voted to close Colton elementary school, a school which had been specially fitted to serve students with disabilities. The school was rented out to a private religious school that served children with disabilities.

In 2010 the school board voted to close Hillcrest elementary school as well. This was done over the objections of the superintendent and the president of the school board. Over 1000 people turned out to the board meeting to oppose, more than would fit in the gymnasium. Those voting to close the school were Wieder, Hopstein, Solomon, and Kohn.

The board then proceeded to sell the school through a bidding process, with a high bid of $3.1 million coming from Yeshiva Avir Yakov of New Square.
An appeal was filed with the New York State Education Department which forced the school board to release the appraisals it had used to justify the sale price. The first appraisal, for $5.9 million was done in May of 2010. The bids came in in July with a high bid of $3.1 million, and within two weeks the board obtained a second appraisal for – wait for It – $3.2 million.

The NY State Commissioner of Education annulled the sale based on the short turnaround between getting a second appraisal and accepting the bid. There was literally no time for the board to analyze why the two appraisals were so different. The district went on to rent the school to Yeshiva Avir Yakov, again for less than its value, another decision which was overturned later by the State Education Department.

Meanwhile, a parent who was also a real estate appraiser got a copy of that extremely low second appraisal. He took the time to double-check the work and found what he considered to be fraud. The appraisal was done using a process of “comparable sales”, in other words looking for similar properties that have been sold and comparing the sale prices. What this parent found, in the archives in the basement of town hall, was that what the appraiser had presented as a “comparable sale” of a school in Monsey was in fact the sale of vacant property, a parking lot!

At this point, we collected all the relevant documents and sent them off to the Public Integrity Unit of the New York State Atty. General’s office. That was November of 2011. In July of 2013 the appraiser who filed the false instrument was arrested. The Public Integrity Unit alleged a scheme in which “an individual” had introduced the appraiser, a Mr. Avi Vardi, to representatives of Yeshiva Avir Yakov and they paid him for a rush appraisal. Then a “board member” sent Mr. Vardi’s contact information to the board attorney who hired him on behalf of the school district to produce this appraisal. According to the Public Integrity Unit, the appraisal was “manipulated” to provide a figure in line with the bid which had already been made by the yeshiva.

The district also sued the State Education Department for its decision to annul the lease of Hillcrest to the yeshiva. While this lawsuit was going on, the district entered into a series of arrangements with a shell corporation formed in Delaware which led to the sale of the school again to the yeshiva, this time for $4.8 million.

The only person ever punished for the fraud associated with the sale of the school was the appraiser. He was fined $1000, had to pay back what he charged for the appraisal, and gave up his license for three years. There was no explanation from the Atty. General’s office as to why they did not charge the other persons involved in the alleged “scheme”. It is worth noting that Atty. General Schneiderman had received significant support from the same bloc vote that installed the school board, as reported by FBI undercover informant Moses Stern, who testified that he was involved in Schneiderman’s campaign, running a shadow campaign, helping him gain support in the Orthodox community.

Over the next several years, enrollment in the East Ramapo public schools increased dramatically. Class size at the elementary level has increased by 25% and there is simply too little classroom space to accommodate the needs of public-school students. Replacing Hillcrest elementary school could easily cost the district $12 million.