There will be a vote on December 6 to approve spending $60 million for renovations to school buildings and grounds. A YES Vote will benefit the children.

The NY State Education Department has responded to the NAACP request that they oversee the process. They say it is their “intent to provide the oversight and technical assistance to ensure the project is a success.”

While it is reassuring to hear that NYSED intends to do its job, the NAACP letter also expressed concerns about a repeat of past abuses by the school board.

In recent years the school board has closed and sold two public schools (Hillcrest and Colton). They did this despite increasing enrollment and over the protests of educators and parents. At the time, one school board member said “buildings do not educate children.” The buildings that they deemed excess and converted to yeshivas were the only two that were not on the state list of buildings in need of repair.

Pressure to convert public schools to yeshivas has not abated.

There is massive pressure from developers to create segregated neighborhoods that require infrastructure including non-public schools. According to the lawyer for one yeshiva, there is competition with residential builders for land, and “the pressure is intensified” when the East Ramapo school district hasn’t “sold any of its sites as surplus.”

The children need well functioning buildings. Passing these resolutions will result in better school environments for our children.

Yes, the school board could turn around and try close a newly renovated building, and sell it to their friends for pennies on the dollar, but we cannot allow ourselves to descend into hopelessness and despair.

Public school advocates now include: Strong East Ramapo, Padres Unidos of East Ramapo, Rockland Clergy for Social Justice, We The People, The NAACP, Advocates for Justice, East Ramapo Underground, and more. Elected officials at the local, state and national level have become involved. The school board has earned national and even international notoriety for their callous treatment of children.

In short, now is not the time to give up hope!

Each year, when the school budget comes up, voters where the majority of students go to yeshivas vote NO for the public school budget. Will they vote YES for the renovations? Are they hoping these buildings will one day be converted to yeshivas, like Hillcrest and Colton? How can they vote down money for teachers, and allow it for buildings, while at the same time we are told “buildings do not educate children”?

Despite this apparent hypocrisy, we must offer ALL the voters a chance to support BOTH sound schools buildings AND the educational programming they need to complete their education and be college ready.

The next vote will be in May. Superintendent Wortham must offer a budget that is based on the students needs. Just as ALL the voters are expected to support building renovations, ALL the voters should be expected to support quality programming. That includes small class sizes, collaborative classes for special needs, business classes, vocational classes, advanced placement, as well as support staff such as social workers, guidance counselors, etc.

These are needed for our children. There is no such thing as someone else’s children. They are all ours. They are our future. They are your legacy and mine, together. If there are some who don’t see it, we still can’t walk away from it. Thanks to all of the Power of Ten readers, I know there are many public education advocates working for justice in East Ramapo.

In a Community View in the Journal News, the president of the Rockland County Teachers Association calls on the state to change rules for funding private-school programs: State must prevent the ‘next’ East Ramapo

This is one of the the most important letters ever published on the subject. It is worth a subscription to the Journal News just to read this one letter!

In the last edition of The Power of Ten, I reported that the Town of Ramapo is charging East Ramapo an estimated $1.2 million per year for collecting taxes, a service that other towns provide for free.

The superintendent of Ramapo’s other school district, Ramapo Central, has written a Community View in The Journal News asking readers to tell Cuomo to sign a bill that empowers school districts to collect their own property taxes. This bill has already been passed and is waiting for the governor’s signature.

Action Opportunity: Please go to the following link: www.ramapocentral.net/district/advocacy which has been set up to assist the community in reaching out to the governor.

Willie Trotman, the president of the Spring Valley NAACP, has written a letter to the Journal News giving conditional support for the upcoming bond vote. His support is conditional because the school board just sold two schools which had been renovated as public schools, and then opposed legislation which would prevent them from doing it again.

No one knows better than Mr. Trotman the terrible impact that dilapidated schools are having on our youth. He is asking the state in this letter to guarantee that they will prevent our public education system from again being the victim of real estate speculators.

The East Ramapo school board is a pariah, a rogue board which has abandoned its mission. They cannot complete the function of “trustees” if they cannot be “trusted”. They haven’t admitted wrongdoing and they haven’t changed their ways. They will have to be watched every second until an alternative governance system is implemented.

The school board could have guaranteed a pass for the bond vote, and extra state aid just by allowing more state oversight. The state could have passed the oversight over the objections of the board.

So the first two “NO” votes for the bond are really coming from the school board and NY State.

The NAACP deserves credit for putting the kids first. They are saying “YES” even if it is conditional. Right now they are down 2-1, but the state could still step up and provide the oversight Mr. Trotman is asking for. That second “YES” from NY could be the deciding factor. 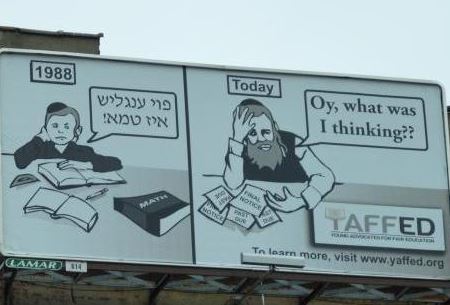 There are many important local elections this year. A complete list is available from The Journal News at http://www.lohud.com/story/news/politics/elections/2016/10/21/whos-on-ballot-rockland-candidates/92408902/

There will also be a candidates forum hosted by the NAACP and JAMCARR:

Correction: In the last issue I misidentified the Assembly District of Ellen Jaffee. She is in the 97th AD. Please do not fail to vote for Ellen Jaffee, if you live in her district. If you do not, find out how you can help her campaign by visiting her webpage at http://www.ellenjaffee.com/

NY State law and the regulations of the Commissioner of Education clearly place the responsibility for compulsory education of minors on the desk of the Superintendent of Schools. On October 26th, Naftuli Moster, an advocate for parents of students in East Ramapo yeshivas, spoke at the school board meeting and officially put Dr. Wortham and the board on notice that many, if not most students in yeshivas in East Ramapo are not receiving an education as required by law.

Please go to http://poweroften.us/ and sign the letter to Dr. Wortham asking her to prevent scare education resources from flowing to institutions where education is not provided.

As reported in The Journal News, the Town of Ramapo is charging East Ramapo an estimated $1.2 million per year for collecting taxes. By comparison, the Town of Orangetown charges Pearl River only $60,000, and the Town of Clarkstown does not charge a fee at all!