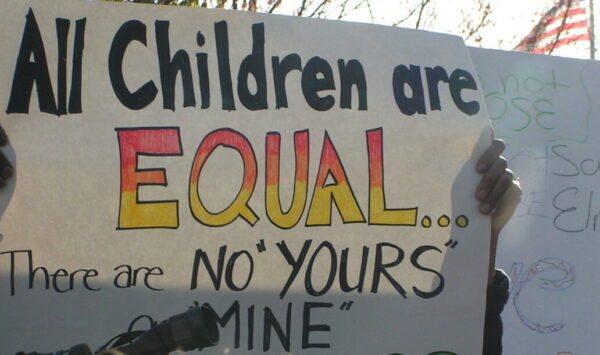 In his closing arguments against the ward system for East Ramapo, the school board’s lawyer claimed that the Orthodox school board members and their supporters are colorblind: “Do you really think that the District’s Orthodox voters would vote differently if the majority of public school students were white?”

Like all ‘colorblind’ arguments, the school board’s plea is in reality only blind to the nature of race discrimination. In fact, indifference to the plight of people of color is one of the major characteristics of organizational racism.

Another hallmark of racist mindset would be to claim that you know what people of color really need better than they do. Again and again, the board makes the assertion that “race is not what is driving the elections, it’s something else”. They assert that Black and Latino members of the community and the organizations representing their interests are untrustworthy. They systematically exclude the board members of color from conversations about how the board should deal with a complaint from the NAACP. The white board majority did not seek guidance from the black board members even after a judge had ruled that the facts supported the NAACP.

Today, all around the country, people are reexamining unspoken assumptions and long established policies that sanction white privilege and facilitate oppression of black and brown people. The white men who make up the majority of the East Ramapo school board would have you believe that they (and their supporters) are all immune from racism, and they make this claim, astonishingly and boldly, in the same breath that they condemn people of color as untrustworthy and unqualified to know and express their own interests!!!

In perhaps the most perverse twist of all, the white board members are now using their power to take money away from an educational system that serves the children of color in another ill-fated attempt to perpetuate their racist system. They are literally robbing education from children of color to pay for a lawsuit to prove they are not racist. Could they possibly make it any clearer? Yes, It’s racism!

East Ramapo has had more failed budgets than any other district in New York State. This is because those who designed the system of funding and governing public schools never anticipated a situation where the private schools were the majority. When the same people who use the schools are the ones who pay the taxes and make decisions about raising and spending money, the system functions as intended. When the majority uses private schools, the checks and balances inherent in the system are removed.

The private school system usually tries to use a failed budget as a way to blackmail the district into shifting more funds from public programs to private services. Like any other kind of blackmail, paying once only guarantees a higher price next time.

Public school advocates have been sounding the alarm to the state for decades. What is really needed are changes to the governance and funding systems. We are waiting on Albany to correct these. The fate of East Ramapo is in the hands of Governor Cuomo, Speaker Heastie, and Senator Stewart Cousins.

Detailed information on this year’s failed budget is available from The Journal News.

Today, June 23, is the Democratic Primary Election. If you have not already voted by absentee or early voting, this is your last chance! Absentee ballots must be postmarked today, or you may vote in person, but be aware that they have changed some polling places.

East Ramapo is a hot topic once again. As previously reported in The Power of Ten, Mondaire Jones is an East Ramapo graduate making a historic run for congress, and oversight of East Ramapo is a major topic in the NY Senate race, with explosive allegations by Elijah Reichlin-Melnick that opposition to a monitor with veto power has become THE DECIDING FACTOR for the “leadership of the Hasidic community”.