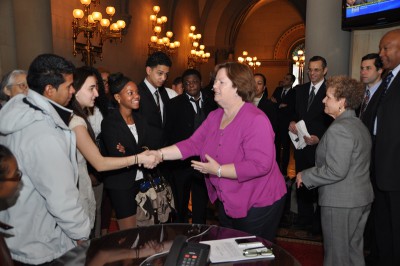 1. May 19 Vote!
2. Rally at County Legislature
3. Overwhelming Support for Oversight Bill
4. Watch The News 12 East Ramapo Special All This Weekend

Your Polling Place for school elections is NOT the same as for other elections. Info on where to vote is available on the district webpage: http://www.eram.k12.ny.us/

There are no political parties in a school election, so each candidate has a different line on the ballot. Here is a sample to make finding our candidates easier:

Join us for phone banking on Monday Evening and Tuesday, or handing out flyers on Tuesday. Just send a message to: steve@poweroften.us for the info on where to go. We will be celebrating at El Mana Restaurant, 28 N Main St Spring Valley after 10 PM.

2) Rally at County Legislature May 19

The Rockland County Legislature will HOPEFULLY vote on a Memorializing Resolution in support of State Assembly Bill A.5355 and State Senate Bill S.3821 calling upon the State Legislature to appoint a State Monitor to work with the East Ramapo Board of Education and Superintendent, and to ensure fairness and equity FOR ALL OUR CHILDREN.

The following County Legislators are on the record as supporting the East Ramapo oversight bill:

We are asking you to call these Legislators and say: you fully support them; you support this bill; and failure to pass the Memorializing Resolution in the County Legislature is not an option. Let them know you are in their corner and they are doing the right thing.
To contact your county legislator go to this link: http://rocklandgov.com/departments/county-legislature/

We are asking that you come to the meeting of the Legislature on Tuesday to support these Legislators and to make sure that they follow through. Our children’s future is at stake, we cannot afford to take anything for granted.

Several New Endorsements of the East Ramapo Oversight Bill confirm what the supporters have been saying, and completely disprove what the critics of the bill have been claiming.

Supporters say this bill upholds the civil rights of children to an education, critics say that the bill is anti-Semitic bigotry. The Unon for Reform Judaism says: “Judaism calls on us to cherish education” and “we strongly urge the state to pass this bill”.

Supporters of the bill say it is fiscal mismanagement that is the chief cause of the district’s problems. Critics say it is only lack of state funding. The Alliance for Quality Education, the most vocal advocate for increased state funding for education in NY says: “It is AQE’s position that a state monitor is appropriate and necessary in the highly unusual circumstance where a board found to be favoring private schools is determining public policy.” and “The fact that public school students need protection from their own school board deserves immediate attention”.

Supporters of the bill say NY law must protect the constitutional right to an education. Critics claim the bill is unconstitutional. The NYC Bar association says “The East Ramapo school board has violated the state constitution” and ” state intervention via the proposed bill is appropriate for East Ramapo’s unique situation”

Even the New York State School Boards Association, which has long opposed any state intervention in local districts does not oppose this bill. They find that “the legislation respects the democratic electoral process by leaving the elected board of education in place and allowing the potential for their continued role in governance.”

So, there you have it. Every single criticism of the bill is completely disproved by respected authorities on the issues.

4) Watch The News 12 East Ramapo Special All This Weekend

News 12 will be airing an extended special piece about the East Ramapo school district Saturday and Sunday, May 16 and 17.

If you have Cablevision, tune in to Channel 12, if not, find a friend or neighbor who does! You can even watch it on your laptop or smartphone!

Justice is Coming, and YOU are making it happen!!!