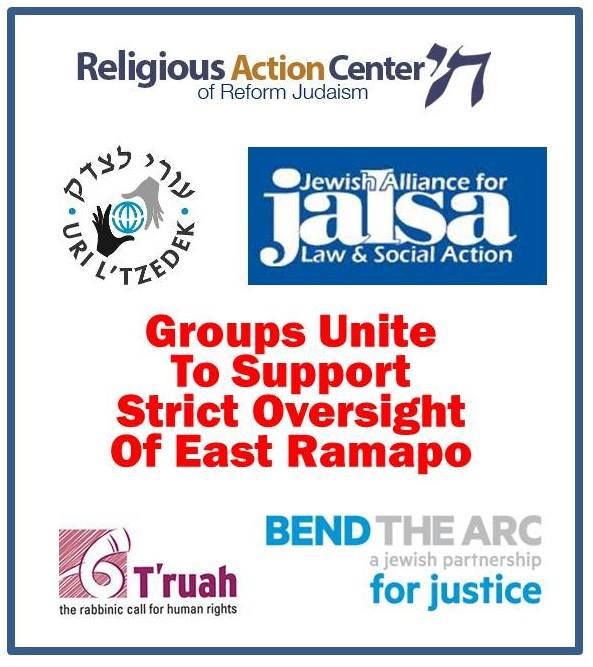 News 12: School board seats up for grabs in East Ramapo

Keynote speaker: Dr. Betty A. Rosa- Chancellor of the NYS Board of Regents

NEW HYDE PARK IS WITH US — Great news! New Hyde Park-Garden City Park School District has joined the list of the now SEVEN Long Island school districts that have passed resolutions in favor of oversight with veto power for the East Ramapo School District. You can contact Senator Jack Martins’ office at 518-455-3265, letting him know that the New Hyde Park school board is supporting East Ramapo oversight with veto power (Senate Bill 3821), and he should join the bill as a co-sponsor.
Please also send a thank you note for the board to JRoberto@nhp-gcp.org.

NICE WORK, NANUET — The following resolution in favor of East Ramapo oversight with veto power passed the Nanuet School Board in Rockland County last night:
Whereas, with professional guidance from the Superintendent, School Boards are responsible for decision-making and oversight of district funds (in a fiduciary role), infrastructure, resources, personnel, curriculum, and related programs with the overarching goal of providing a high-quality, equitable education for public school students and, as outlined by state law, to provide specific services and resources to private school students residing in the district; and
Whereas, when a Board consistently acts in a manner which diminishes the quality of education for students – public and/or private – stringent oversight is essential; and
Whereas, we concur with the Monitor’s report regarding the East Ramapo School District,
NOW, THEREFORE, BE IT RESOLVED THAT:
1. The Nanuet Board of Education supports the appointment of a Monitor with veto power to ensure East Ramapo School Board decisions are in the best interest of all students.
2. The District Clerk is directed to send this resolution to Assemblymember Ellen Jaffee, Assemblymember Kenneth Zebrowski and State Senator David Carlucci.

A previous article was unclear about the new support for the bill for a monitor with veto power. It should have read:

The Rockland County School Board Association has sent a letter to Governor Cuomo and the chairs of the Education Committees of the Senate and Assembly endorsing the legislation for a monitor with veto power.  Six school boards from across Long Island have also expressed support for the bill by passing resolutions (latest news: now it is seven) in favor of East Ramapo oversight. Two County Executives have Joined with Rockland County Executive Ed Day in calling on Senator Flanagan to stop blocking the bill for a monitor with veto power. Senator Flanagan needs to hear from YOU too. Please sign our petition asking him to visit East Ramapo and see first hand that NY State cannot continue to ignore the crisis in governance of our schools.