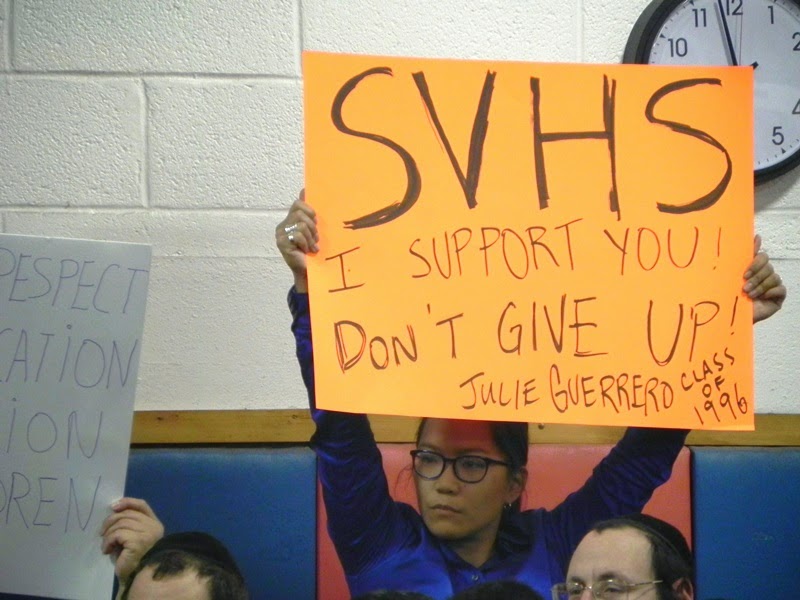 Latino parents and supporters have held protests at the past seven board of education meetings, even on two occasions when the meetings were cancelled by the board. This Tuesday would have been the eighth meeting, but it has been cancelled. That is right, three of the eight meetings this school year so far (37%) have been cancelled!

There will be a special meeting Monday Jan 5th at which the board will receive Open Meeting Law training as mandated by NYSED following the recommendation of the fiscal monitor. There will be a silent protest at that meeting. The new schedule for the rest of January is:

All will be at the District Administration Building, 105 S. Madison Ave, Spring Valley NY

2) Legislative Advocacy Update
Two letter writing campaigns have addressed the legislation currently being written in response to the fiscal monitors recommendations. If you have not participated yet, please do so now!
3) Graduation Rates Fall Again
The state has released the latest data, read about it in this Post by East Ramapo Underground.
4) School Board Sues State Education Department Again
According to the Journal News, “East Ramapo officials are again taking the state to court in their battle against what the state says is repeated noncompliance with a law covering disabled students’ education.”
5) NAACP President’s Community View
The President of the Spring Valley Branch of the NAACP has written a Community View published in the Journal News:
East Ramapo reluctant to assist immigrant parents