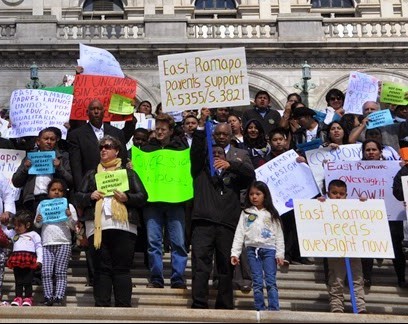 Over 350 parents, students, and supporters convened in Albany to support the legislation for oversight for East Ramapo. They made a dramatic impression on the senators and assembly members. Many reacted to the personal stories of the students who detailed the impact of the crisis on their lives. The parents made it clear to lawmakers that it is the State of NY which has the ultimate responsibility for ensuring a sound basic education, and that they welcome action from the state to ensure that right for their children. Right now only 15% of East Ramapo students are proficient in Math, and 14% in English. These statistics are unacceptable. Taxpayers told legislators that they know East Ramapo already receives more state and federal aid than any other school district in Rockland County, while delivering the lowest graduation rate. They know the district has been cited by the education department multiple times for illegally diverting funds to private religious schools, and is even being investigated by the Attorney General for selling district property below market value. They agree with Hank Greenberg: “Not one more cent without oversight”.

Opponents of the bill have been in Albany spreading misinformation, claiming that the problems are due to lack of state aid, and that critics are only motivated by bigotry. These claims were categorically refuted by the diverse group that went to Albany; the truth has been nicely summarized in an op-ed piece in the Journal News, jointly authored by Rev. Weldon McWilliams IV and Rabbi Adam Baldachin:

After the visit several legislators joined on as cosponsors, and Sen. Carlucci got the Senate Education Committee to agree to place it on their agenda.

Stay tuned for the next steps to support this innovative and fair solution for the crisis in East Ramapo.

2) Protests Continue at Board Meetings

Parents and students have been attending board meetings and voicing their concerns about the impact of fiscal mismanagement and insensitivity of the administration and board members. Please join us at the next meeting:

Tickets and dinner journal ads are available for purchase at: https://action.aclu.org/secure/lhv-dinner-2015