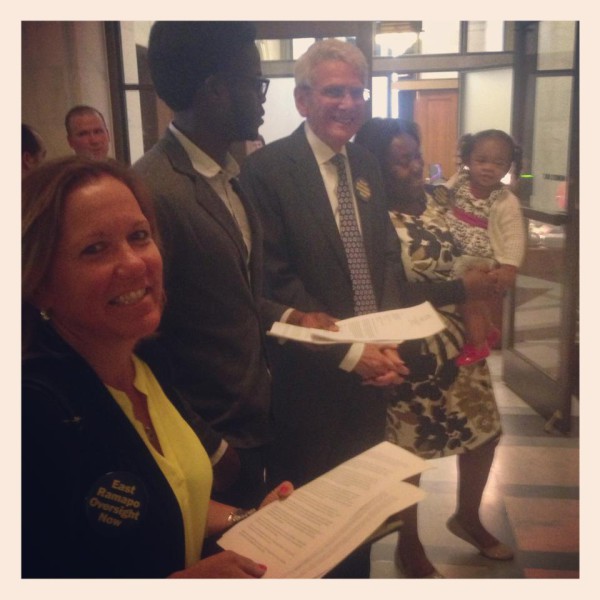 The NY State Assembly Education Committee voted today to support the bill for a monitor for East Ramapo school district! This is one very important step towards the bill becoming a law. This law would protect the civil rights of the children in East Ramapo. Next steps are passage by the full Assembly and the Senate Education Committee.

With the New York Legislative session ending June 17, the clock is ticking for Assembly Bill 5355 and Senate Bill 3821. A group of supporters for East Ramapo’s children have decided we need to make another trip to Albany. We will be traveling by individual cars and gathering at 9:30 a.m. in the Legislative Office Building for a special event before meeting with lawmakers throughout the day. We will conclude at 3 p.m.

The endorsement of the school board association is particularly important because the East Ramapo school board is itself a member. It shows how far the board has gone astray from it’s mission. What is the mission of a school board? From the National School Board Association: “Education is not the first priority of a school board. It is the ONLY priority.”

4) NY Times Op-Ed “When a School Board Victimizes Kids”

Chancellor Merryl Tisch and David Sciarra (head of the Education Law Center) have written the op-ed in the New York Times.

They cite “overwhelming evidence” that the East Ramapo school board has “utterly failed” the children.

They say the bill for a monitor is a “crucial step toward reversing the district’s disastrous decline and repairing the deep rifts in the community”.

This is a must-read: When a School Board Victimizes Kids

5) Rabbi Hart: board actions are a “flagrant violation” of Jewish values

In an opinion piece in “The Forward” (the most widely read Jewish newspaper) Rabbi Ari Hart calls on fellow Orthodox Jews to “find a way to both advance our interests and needs while taking the needs of our fellow citizens into account”. He believes an independent monitor would build trust, which would be “ultimately … the best path for everyone”.

Capitol New York’s education reporter Jessica Bakeman reports that NY Governor Andrew Cuomo said he supports the bill for a monitor and is pushing for the Legislature to pass it. During a visit to Nyack on June 3rd, he said “There’s no reason why they can’t do it. They have two weeks left.” Cuomo also said charges of anti-Semitism against bill supporters are just politics. “they’ll say whatever they have to say,” Cuomo said.

7) Last Call: Please Join me at the NYCLU Dinner