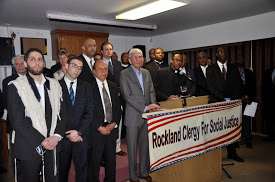 The Announcement of the formation Rockland Clergy for Social Justice and their call for Gov. Cuomo to intervene in East Ramapo has been covered widely in the media:

The New York Times: A School Board That Overlooks Its Obligation to Students

The Commentator: Our Education Problem

The group plans to visit Albany and hopes to meet the Governor face to face later this month.

One member of the group, Uri L’Tzedek (Awaken to Justice), has created an online petition for Jewish Citizens to support the mission of the group.

2) Judge sides with East Ramapo over Yeshivas, but board votes to ‘settle’, awarding millions in credit.

However, at the last board meeting, the school board voted to “settle” with the schools, awarding not just the whole amount the judge just said they didn’t owe but also other credits totaling over $2.5 million dollars. East Ramapo ready to grant credit in school’s sale.

The East Ramapo board’s “desire to resolve and settle … to avoid the risk, uncertainty, continued expenses and inconvenience” when it comes to ultra-Orthodox Jewish schools and families presents a stark contrast to the legal stance they have taken towards public school parents and the state education department.  They file appeals when they lose and appear willing to spend any sum when facing public school advocates in court. But when the opponent is a yeshiva even when the judge has said they don’t have to pay, they settle!!!

As reported in the Journal News ‘East Ramapo’ play aims to help ease friction in district , The new play by Mark Judelson has been a big hit.  You have two more chances to catch it, at CEJJES in Pomona (Directions) this Saturday at 2 PM, and at the Kurtz Center in Spring Valley on April 28 at 7:30 PM.

On Thursday, April 10th at Ramapo High School from 7-9 pm is the “Induction for the National Honor Society”. Congresswoman Nita Lowey will attend. Let us show Congresswoman Lowey that we care about our kids by attending this event. – (Thanks to Carole Anderson for this message)

5) Advocates for Justice needs your help

Thanks to many generous donors, Advocates for Justice raised over $7,000 at the ‘Breakfast for Justice’ event last month.  Thank you to all of those who gave.  However, there is still much work to be done and funds are truly needed.  Your donation to Advocates for Justice is tax deductible and goes 100% to obtaining justice for the children and families of East Ramapo.  All the information you need is at http://poweroften.us/donate/