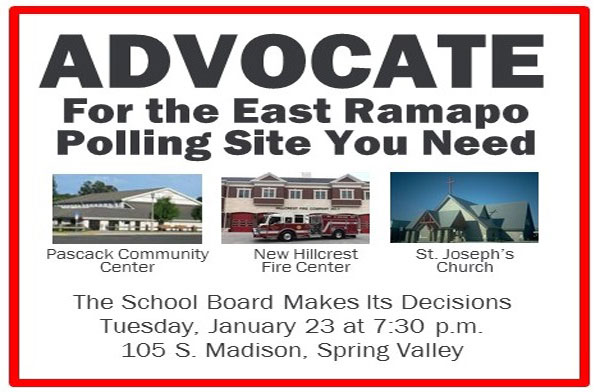 The school board and budget vote will take place on May 15. Strong East Ramapo will be working hard to get the vote out to pass the budget. Power of Ten will work to identify and assist candidates for the school board positions.

There are certainly many people in East Ramapo who are qualified to serve on the board.

The Center for Public Education says an effective school board member should:

A public forum will be held in the first week of February for the public to meet the potential candidates.

Three years ago, Monitor Walcott recommended that an independent election monitor oversee the election process, including designating new polling places. This did not happen. Last year, two new polling places were proposed by the District Clerk, both of which were located in areas where most children are sent to yeshivas.This was not received well by advocates for more resources for public education. Over the past 3 months, a committee led by the District Clerk has been discussing possible changes. The committee included some poll workers, the NYSED monitor, some opponents of increased resources for public education, and some education advocates, including myself.

Location of polling places can influence voter turnout. Factors which affect turnout include confusion when the school polling place is different from the November polling place, distance to the poll, and finding parking. These may be reasons that voters in the Clarkstown and Haverstraw sections of the district have the lowest turnout.

I provided the committee with a plan to balance the polls from the very first meeting.

This plan added polls in Haverstraw and Clarkstown, and moved the main location for Spring Valley voters (who support more resources for public education at a higher rate than any other voters in Rockland) to St. Josephs, which is where they vote in November elections, and also the Hillcrest Firehouse, which is where most Hillcrest voters (also strong public school advocates) vote in the November elections.

Both the Haverstraw and the St. Joseph’s locations were left out of the plans which were sent to the board. St. Joseph’s was not included in any of the three final options because a concern was raised about Orthodox Jews who may have a religious objection. However, NY State Election Law Section 11-300 allows for voting at an alternative location when  “It is against my religious scruples to vote at a polling place located in a premises used for religious purposes.” This option would only apply to a very few people, if any, based on the areas which would be assigned to the St. Joseph’s poll.

The final decision is with the board. They could include none, some, or all of the polls which are most likely to be used by supporters of public education. It has been shown that they will listen to public opinion, sometimes.

The next board meeting is Tuesday. Please come and express your preference.

The New York Civil Liberties Union (NYCLU) with Latham & Watkins LLP, on behalf of the Spring Valley Branch of the NAACP and other plaintiffs, has filed a law suit in federal court challenging the at-large method of electing members of the East Ramapo Central School District Board of Education. The suit claims the at-large system unlawfully denies black and Latino citizens in the District an equal opportunity to elect candidates of their choice.

Under this system, board members are elected by all the voters of the school district rather than voters from individual geographic areas. This allows the majority community—which is white, lives close together, and tends to vote as a political bloc favoring private school education—to control eight of the board’s nine seats. Communities of color, who tend to vote as a bloc for candidates favoring investment in public schools, have not seen their candidates of choice win a contested seat since 2007.